Quantization of the volume of the simplest grain of space 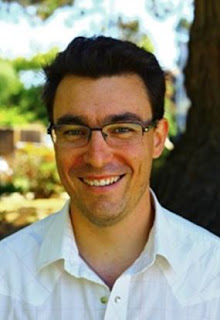 By Jorge Pullin, LSU
There exists a concept in mathematics called "asymptotic resurgence" in which an infinite sum of terms exhibits a surprising behavior. The terms that appear late in the summation around one physically relevant point are exactly the same as the terms that appear early in the sum around another physically relevant point. The result is a rich connection between the physics at the two different extremes and has applications in many areas of physics, for instance in the calculations of intensities of rainbows.
This talk applies these ideas to the calculation of the volume in loop quantum gravity. The volume of a region of space is discrete in that theory and has a complicated expression depending on the details of the quantum state one is considering. The expressions are known but are difficult to interpret. Previous studies have dealt with them primarily through numerical methods. In this talk an approximate expression is derived that can be much more easily interpreted and studied. It applies it to the simplest "grain" of space, a tetrahedron. A neat illustration of the power of the insights that can be learned from having an easier to interpret expression is the following movie following tetrahedra of different shape but equal volume:
To quote the concluding slide: "Quantization of geometry provides a remarkable laboratory for understanding resurgent perturbative/non-perturbative relations and, due to the richness of its underlying quantum structure, may even require extensions of this formalism."
Posted by Jorge Pullin at 1:22 PM No comments: 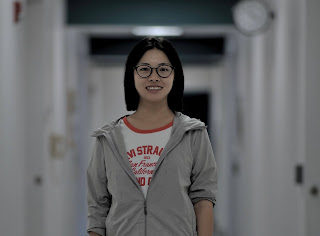 By Jorge Pullin, LSU
The states of quantum gravity in the loop representation are given by spin networks. These are multivalent graphs with a number associated with each line. Spin foams represent the transition from an initial spin network state to a final one, as show in the figure (credit: Alejandro Perez). The expanded picture on the right is what is known as a "vertex", where new lines in the spin network are created as it transitions forward in time (time is the vertical axis). These diagrammatics correspond to precise mathematical 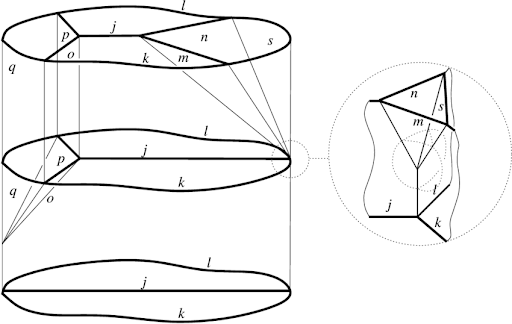 How the cosmological constant q-deforms symmetries in Loop Quantum Gravity 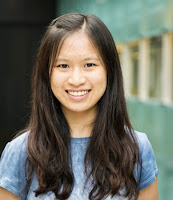 Ashtekar showed in 1986 how to rewrite general relativity in terms of variables that make it look like the Yang-Mills theories that describe particle physics. This was the cornerstone that allowed the introduction of loop variables by Rovelli and Smolin and led to the development of loop quantum gravity.

Yang-Mills theories are generalizations of Maxwell's electromagnetism which have several electric and magnetic fields. These theories have a symmetry through which multiple field values correspond to the same physical situations. The transformations among the fields that keep the physical situation invariant form a mathematical structure called a group. The particular group that arises in loop quantum gravity is called SU(2) and is similar to the one that appears in the theory of the weak interactions.

Posted by Jorge Pullin at 5:12 PM No comments: 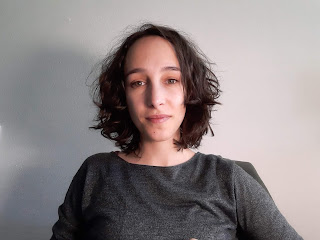 by Jorge Pullin
One of the main achievements of the model of cosmology known as Inflation, in which the universe after the Big Bang expands exponentially, is that it predicts the spectrum of cosmic microwave background radiation. This is radiation that comes to us directly from the earliest moments when the universe stopped being a primordial soup and became transparent to light. If one looks in different directions, the frequency of the radiation is not exactly the same. It differs in parts in a million. And the differences are not random. If one looks in a given direction and then looks at a circle in the sky centered in that direction and averages out the frequencies, if things were random, the result would be the same no matter what size the circle. It turns out it does, mathematically one says the signals are correlated.
If one assumes one starts inflation with a quantum field present, and one assumes the simplest possible state for the quantum field (the vacuum) and evolves the quantum state through inflation, the state develops correlations that correspond precisely to the ones observed in the cosmic microwave radiation. This model is remarkable in its simplicity and efficacy.
In traditional cosmology, where things start with a Big Bang where the whole universe is concentrated at a point, it appears natural to place the quantum state of the field in the vacuum at the beginning of inflation, as it is impossible to place it at the Big Bang as the theory breaks down there (densities and curvatures are infinite). But in loop quantum cosmology, the Big Bang is replaced by a Big Bounce where everything is finite and there is dynamics of the universe prior to it. Why would then place the state in a vacuum at the beginning of Inflation, as that instant in time does not have any privileged meaning. Perhaps one should place it at the Bounce (now this is possible as the space-time is regular there). Or somewhere else. All that means that at the beginning of Inflation, the quantum field will not be in the vacuum state anymore. This talk addressed these issues.
Posted by Jorge Pullin at 9:37 AM No comments: 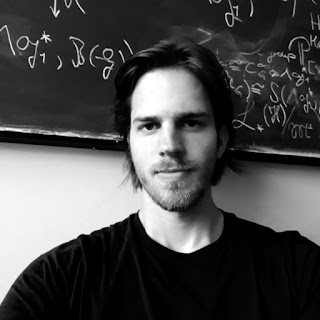 By Jorge Pullin, LSU
Supersymmetry is a conjectured symmetry of nature in which to each particle corresponds a "superpartner" particle. The partners of bosons are fermions and vice-versa. So for instance, the electron (a fermion) has a boson superpartner known as the "selectron" and so on. No superpartner has ever been observed in reality so it is conjectured that this symmetry is broken in nature and can only be present at very high energies. Unfortunately, experiments at large accelerators like the Large Hadron Collider at CERN in Switzerland, are putting tighter and tighter bounds on supersymmetry. Supersymmetry is usually incorporated into string theory, hence the name superstrings.
If one incorporates this symmetry into gravity, one obtains supergravity. This theory potentially has interesting properties. It could avoid the infinities one faces in usual perturbative quantum gravity, although this is not entirely clear yet.
This talk was about applying loop quantum gravity techniques to supergravity. It updated the treatment with modern techniques (older results referred to techniques that are not used anymore, in particular the use of complex variables) and further insights on how supersymmetry can manifest itself in the form of a gauge symmetry, the kind of symmetry that is the basis for the description of the other forces in nature. Among other aspects it explored the behavior of the theory in cosmology and how one could use supersymmetric matter as a "clock" to study the evolution in time. It also considered calculations of black hole entropy and how it could lead to connections with similar calculations in string theory.
Posted by Jorge Pullin at 3:55 PM No comments: 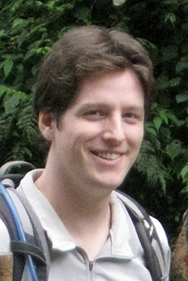 By Jorge Pullin, LSU
Stars are balls of fluid that are try to contract through their own gravitational attraction but are kept form doing so by burning nuclear fuel, which also makes them shine. When the fuel gets exhausted they start to contract. Depending on the details, the contraction can become uncontrollable, leading to an object so dense that gravity is so intense that not even light can escape from them. That is what is known as black hole. The matter continues to contract inside the black hole and eventually get highly concentrated. In classical general relativity, this leads to a "singularity", a point where density is infinite. It is expected that quantum gravity will eliminate such singularities, replacing them by a highly quantum region of high curvature.
Loop quantum gravity has led to scenarios of that nature. These investigations are pursued by restricting strongly the degrees of freedom of the problem before quantizing, this makes quantization possible. In this talk one of such proposals was considered. The particular freezing of degrees of freedom requires choosing certain coordinate systems that simplify the equations. This allows to treat the problem including the presence of matter. This in turn opens the possibility of studying how the matter collapses, forms the black hole, and then, since things never become singular, the matter explodes into a "white hole", the time reversal of a black hole. This opens new possibilities for understanding the ultimate fate of black holes and what happens to the information that falls into a black hole, is it lost or is it recovered? Further research will shed light on these issues.

Posted by Jorge Pullin at 10:37 AM No comments:

Quantum gravity at the corner 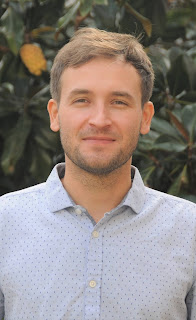 By Jorge Pullin, LSU
Many physical theories are described in terms of more variables than needed. That includes field theories like general relativity. For an analogy consider a pendulum. We can describe it by giving the x,y coordinates of the bob, even though everything is completely characterized if one just gives the angle of the pendulum wire with respect to the vertical. When one has extra variables there may exist many sets of values of them that correspond to the same physical situation. In the pendulum x=1,y=1 and x=2,y=2 both correspond to the wire at 45 degrees. So it is said that these theories have symmetries in the sense that many mathematical configurations correspond to the same physical situation. These are mathematical, not physical symmetries. However, if one considers bounded regions of space-time those mathematical symmetries translate into physical symmetries and into conserved quantities. For instance the electric charge. To define electric charge one needs to define a region it is contained in.
More recently the concept has appeared in physics that one can describe what is happening in a region of space-time by describing what is happening at its boundary. An example of this is the so called AdS/CFT or Maldacena conjecture in string theory. This applies to a specific type of space-times called anti de Sitter (AdS) and it says that the description of gravity in the space-time is equivalent to a special type of field theory called conformal field theory (CFT)  that lives on the boundary of the space-time. This property of encoding the information of a space-time in its boundary is known as "holography" by analogy with the optical phenomenon where three dimensional images are captured on a two dimensional photograph.
This talk addressed studying bounded regions of space-time, more precisely bounded regions of a spatial slice of a space-time, where the boundary is two dimensional and is called "corner" in math. It was explored what is the most general set of symmetries that one can formulate and their implications in the corners. It was observed that certain properties of loop quantum gravity, like the quantization of the areas, arise naturally in this context. This way of viewing things opens a new approach to loop quantum gravity that may offer connections with the ideas of holography in string theory.
I benefited from discussions with Ivan Agulló while preparing this text.
Posted by Jorge Pullin at 3:48 PM No comments: